After the Tampa Bay Lightning defeated the New York Islanders 4-0 in Game 5 to clinch that second-round series, Pierre McGuire of NBC Sports spoke with winger Brian Boyle of the Bolts, who had scored a goal in the victory.

McGuire asked Boyle to describe the characteristics of the Lightning.

“We’re a pretty resilient team,” Boyle said. “We’re a pretty committed team and we want to win. We’re competitive. It starts with those three and everything falls in place.”

Boyle should know. It was Boyle who had the game-winning overtime goal in the 5-4 victory by the Bolts in Game 3 in Brooklyn. This was after he put a resounding legal hit on Islanders defenseman Thomas Hickey with his shoulder. After the hit on Hickey, Boyle rushed towards the net and won the game just seconds later.

Hickey was in Boyle’s sites for a reason. Earlier in Game 3, Hickey had leveled Jonathan Drouin with a thunderous (but legal) hit that forced Drouin from the game for over a period.

In Game 2, Hickey had also gone after the knees of Alex Killorn late in the game with the Bolts well ahead in the score.

Plus, Hickey had elbowed Lightning defenseman Victor Hedman in the head late in the season which forced Hedman to miss some games.

Boyle knows that the Lightning can’t afford to see players like Drouin, Killorn and Hedman be off the ice due to injuries. The Bolts have already had to play without key players like center Steven Stamkos (blood clot) and defenseman Anton Stralman (broken leg) through the first two rounds of the Stanley Cup playoffs.

Superb fourth-line winger J.T. Brown also has missed almost all the postseason action as well, after suffering an upper-body injury early in the first-round series versus the Detroit Red Wings.

Still, the Lightning were able to defeat both the Red Wings and the Islanders in five games in the first two rounds of the playoffs.

Why? Almost everyone has played a key role. Tyler Johnson has chipped in 13 points to lead the team. Nikita Kucherov has 12 points, including a team-leading nine goals. Hedman and Killorn each have nine points.

The new wave triplets of Johnson, Kucherov and Killorn have been magnificent, not only in points, but in overall play. Johnson and Kucherov are both +11, while Killorn is +10.

Hedman has been tremendous on both sides of the ice, as he is averaging 27:30 minutes a game. Hedman had two goals in the Game 5 clincher versus the Islanders at Amalie Arena in Tampa. 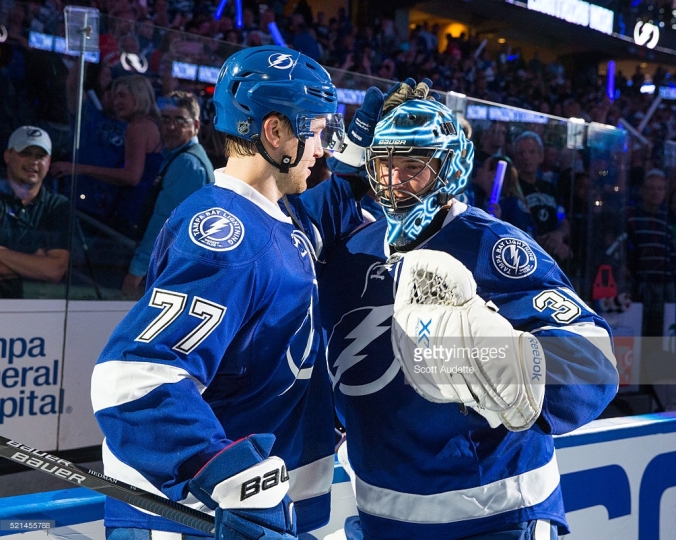 But a hockey team is only as good as it’s goalie, and the Lightning are no different. Ben Bishop has been truly splendid in the first two rounds of the playoffs. Big Ben is 8-2 and has a 1.89 GAA (goals allowed average). Bishop also has a save percentage of .938 and has two shutouts (both in series-clinching games) to his credit thus far this postseason.

It’s no wonder that Bishop, Hedman, Kucherov and Johnson have had their names mentioned in the conversation about who may win the Conn Smythe Trophy this year.

Plus there have been contributions by players like Boyle, Ryan Callahan,  Ondrej Palat, Valtteri Filppula  and defenseman Jason Garrison, who had the game-winning overtime goal in Game 4 versus the Islanders.

The Lightning will face a huge test in the Eastern Conference Final versus the Pittsburgh Penguins. The Penguins were the hottest team in the NHL down the stretch in the regular season and have made it through their first two rounds as well, including defeating the Washington Capitals in the second round in six games. The Capitals won the Presidents’ Trophy for having the best record in the NHL.

Like the Lightning, the Penguins skate fast and have multiple weapons. This includes players like Sidney Crosby, Evgini Malkin and Phil Kessel. Pittsburgh also brings the best power play in the NHL to the ice. The Penguins were 11-for-40 in the first two rounds with their power play.

The Penguins also have a rookie goalie in Matt Murray, who is playing like he is definitely not a rookie. Murray is 7-2 and has a 2.05 GAA. Murray also has a .935 save percentage and has one shutout.

Bottom line, when the series versus the Penguins starts on Friday night in Pittsburgh, the Lightning will have to be at their best.

It won’t hurt the team if they can have back some of their walking wounded in the series either. Both Stralman and Brown took part in their first full team practices on Wednesday since getting hurt.

Stamkos continued to practice in a red non-contact jersey on Wednesday and is still on blood thinners.

“I feel like I can play,” Stamkos told reporters. “It’s just (getting the) word now.”

Time will tell on whether Stralman, Brown or Stamkos will be back anytime soon. Until then, the Bolts will have to play the same way they did in the first two rounds, when they go up against the Penguins for the right to go to the Stanley Cup Final.

That would be playing resilient, committed and competitive hockey. If those three things happen, just like Boyle said, the victories will follow.

3 thoughts on “The Tampa Bay Lightning: Resilient, Committed and Competitive”