The Tampa Bay Lightning are once again on the doorstep of advancing to the Stanley Cup Final, as they will host the Pittsburgh Penguins in Game 3 of the 2016 Eastern Conference Final at Amalie Arena Wednesday night.

The series is tied 1-1 heading into this very important game. If the Bolts can win the series, they will advance to their second straight Stanley Cup Final. In the 2015 final, the Bolts were defeated by the Chicago Blackhawks in six games.

Had the Bolts been healthy last year, it might have been a different story. Goalie Ben Bishop suffered a groin tear in Game 2 of the series and missed part of that game, one entire game completely and played hurt the rest of the series.

Bishop had been outstanding in the playoffs last season, as he had shut out both the Detroit Red Wings and New York Rangers in a pivotal Game 7 situation when the Bolts faced them earlier in the postseason.

Even with his groin injury, Bishop still had a 2.2 GAA (goals against average) and had a .919 save percentage versus the Blackhawks.

Center Tyler Johnson, who was a Conn Smythe Trophy contender heading into the series due to his excellent play in the previous three matchups, broke a wrist early in the series with the Blackhawks.

Coming into the final, Johnson had 12 goals and nine assists. Versus the Hawks and after his wrist injury, Johnson had just one goal and one assist.

The Bolts also know something about the injury bug this postseason, as center Steven Stamkos has not been able to play due to a blood clot. The good news is that Stammer appears to be getting closer to playing.

Bishop also suffered a lower-leg injury in Game 1 versus the Penguins, but he also looks to be back at some point, which is very surprising based on how bad the injury looked and because he was stretchered off the ice.

The 2016 Lightning have been a very resilient bunch and I like their chances of advancing to the final for another chance at winning Lord Stanley. Just like they did in 2004.

Which takes me to a story I wrote, which was first published by JoeBoltsFan.com when it was still in existence and then later by Bleacher Report when I wrote for the site.

I am re-posting the story again here:

The Stanley Cup run in 2004 was something truly unforgettable. I was fortunate enough to go to one game in each playoff series in that run, and the Bolts won each time I was there.

The Lightning started their trek to Lord Stanley by facing the New York Islanders in the first series. The Bolts had a 3-1 series lead as they played Game 5 at the St. Pete Times Forum. I was there with a couple of buddies and the Lightning had a chance to clinch the series. Nicolai Khabibulin had been terrific in goal all series long, as he had three shutouts going entering the game.

Game five went to overtime, and Marty St. Louis was “Mr. Clutch” again and won the game with a fairly long slap shot from the left side. The crowd went wild. It was great to be there as the teams did the handshakes at the end of the game, which is a custom in the NHL after a playoff series ends.

Thanks to my friends at 620 WDAE, The Sports Animal, I had tickets to Game 1 of the next series vs. the Montreal Canadiens. My most vivid memory before the game was a couple of mouthy Montreal fans who kept telling anyone that would listen that Bolts fans did not know hockey and that they were the resident experts.

The Lightning ended up winning Game 1 as Vinny Lecavalier had two goals and an assist in a 4-0 whitewash. My buddy and I saw the same two mouthy Canadian fans after the game in the plaza, but they were hightailing out of there in a hurry. We also ran into another obnoxious Canadiens fan a little later, but after I told him to “Shut your yap” John Tortorella style (okay, there were other colorful words used), the guy meekly went away.

The Lightning ended up sweeping the Habs four games to zip in the series, including a fantastic finish in Game 3 in Montreal, when Vinny Lecavalier scored his fifth goal of the series with 16.5 seconds left to force overtime. Brad Richards then won it in overtime to shock the crowd as the Bolts won 4-3. The Bolts then finished off the Habs 3-1 two nights later.

The next series was against the tough Philadelphia Flyers for the Eastern Conference crown and the right to play for the Stanley Cup. I went to Game 1 with friends, all big Lightning fans, but a couple were former Flyers fans, ironically. As one expected, the Flyers fans in attendance at the Forum were loud and obnoxious, but the Bolts and their fans had the last laugh as the Lightning won 3-1.

The rest of the series was a knock-down, drag-out type of war. The Flyers were led by Keith Primeau. Richards paced the Bolts with two game-winning goals in the series. The Lightning ended up winning in seven games, after an excruciating loss in Game 6 at Philly, losing 5-4 in OT, in a game the Bolts should have won.

The Lightning came back to win game seven at the Forum by a score of 2-1 as Khabibulin was brilliant again. The Lightning now would be playing for the Stanley Cup championship.

The Bolts’ opponent was the tough Calgary Flames, who were lead by Jarome Iginla and goalie Miikka Kiprusoff. But nothing was easy in this series, as the Bolts lost game one at home 4-1, but bounced back to win by the same score as Khabby was excellent, and Richards played lights out again.

Kiprusoff shut out the Bolts 3-0 in Game 3 and the Lightning had their backs to the wall going into Game 4. But once again, Khabibulin was phenomenal, as the Bolts won 1-0 as Richards again scored the game winning goal. Also, this game also had the moment when Lecavalier had his head rammed into the side glass by Calgary’s Ville Nieminen.

That win set up Game 5 at the Forum. However, the Bolts lost 3-2 in OT, sending the Lightning to Calgary in a do-or-die situation behind three games to two. Game 6 was one of the greatest hockey games I ever saw. The Lightning ended up winning 3-2 in the second overtime, as Richards had two goals in the game, but it was St. Louis that hit the game winner in the second overtime to set up Game 7 at the Forum in Tampa. 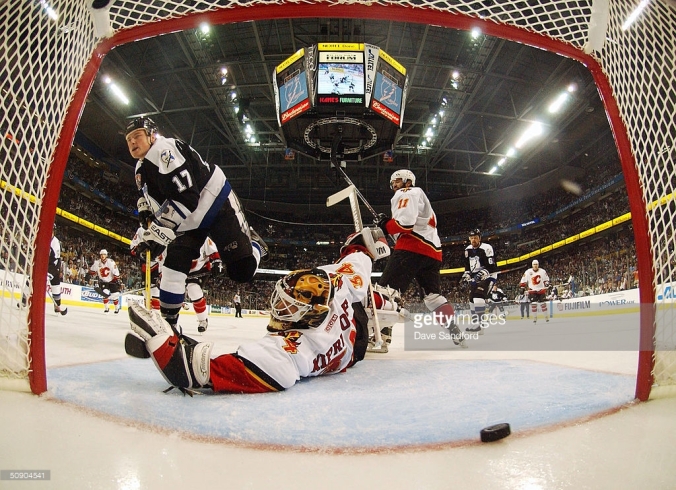 A friend of mine was able to get his hands on some very pricey tickets for game seven, as two friends and I went to the game. As I sometimes do, I called Steve Duemig on his show on WDAE on the way to the game. Steve and I discussed the keys to the game, and that’s when I had my Nostradamus moment. For some reason, I said Ruslan Fedotenko would have a big night.

Fedotenko did have a big night, as he scored the Bolts only two goals in a 2-1 victory over the Flames. Khabby was brilliant yet again, and Richie ended up winning the Conn Smythe Trophy as MVP of the playoffs. But the biggest prize was seeing the Bolts win the Stanley Cup and lifting the trophy high in the air and passing it from teammate to teammate.

Dave Andreychuk was the first to get Lord Stanley, as he had just won his first Stanley Cup after 22 years in the NHL. Then everyone else got their chance.  Vinny, Richie, Marty, Khabby, Fedotenko, Dan Boyle, Fredrik Modin, Tim Taylor, Darryl Sydor and all the other members of the team all got to lift Lord Stanley and skate around.  The crowd erupted when coach John Tortorella lifted the Cup.

That game had to be the biggest sports moment of my life, as I was there to witness the event in person. I have seen similar things in football and in baseball, but actually being there for a championship game, and being at home, made it so special. I was fortunate to be one of the 22,717 that night at the Forum.

The journey for Lord Stanley started on April 8, as the Bolts played their first playoff game against the Islanders. But the journey didn’t end until the Bolts had won 16 playoff games, including the last one for the right to lift Lord Stanley’s Cup on June 7. It was a two month ordeal. Some say the most difficult obstacle in all of sports.

I will always treasure the memory.