Last summer I did a series of articles about the 11 teammates of Jerry Kramer who were inducted into the Pro Football Hall of Fame, as well as the man who made that all possible…Vince Lombardi.

In the stories, Kramer gave me his reflections about those players and his legendary head coach. There is absolutely no doubt that Kramer deserves that same honor based on his great career in the NFL.

As a matter of fact, Kramer should have been inducted decades ago.

The one Hall of Famer who also played with Kramer  and who wasn’t in this series of articles was Emlen Tunnell. The main reason was because Tunnell spent most of his career with the New York Giants.

When Lombardi arrived in Green Bay in 1959 as head coach and general manager, he made a number of trades. The first trade was to acquire guard Fuzzy Thurston from the Baltimore Colts for linebacker Marv Matuzak.

The second trade was to acquire Tunnell from the Giants for cash. Lombardi had been with the Giants himself from 1954 through 1958 as an offensive assistant and he knew full well the talents of Tunnell at the safety position. 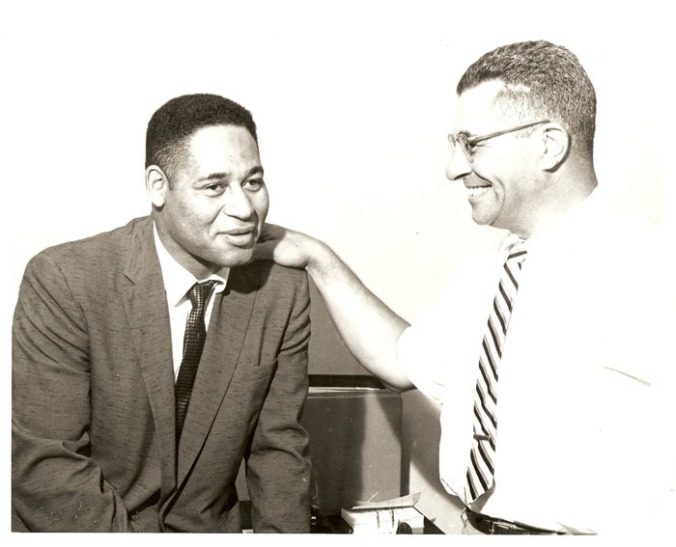 Tunnell had started his NFL career with the G-Men in 1948, after playing at both Toledo and Iowa in college.

Tunnell immediately showed that he was a very talented defensive back, as he had seven interceptions (including one for a touchdown) his rookie year.

Throughout his career with the Giants, Tunnell was considered the very best safety in the NFL, as he was named first team All-Pro four times and was also named to the Pro Bowl eight times.

During that time, Tunnell had 74 interceptions (four of which were returned for touchdowns) and had 15 fumble recoveries as well.

Tunnell was also a very dangerous punt returner, as he led the NFL in punt returns twice, and had five returns for a touchdown. No. 45 also had a kickoff return for a score.

By the time he came to Green Bay, Tunnell had already played 11 seasons with the Giants. But when Lombardi acquired him from the Giants, Tunnell immediately became a starter at safety along side of Bobby Dillon in 1959.

Tunnell had two interceptions for the Packers that year and was named to yet another Pro Bowl.

In 1960, Tunnell started at safety once again, this time next to John Symank. Tunnell had three more interceptions, as the Packers won the Western Conference  and narrowly lost to the Philadelphia Eagles in the 1960 NFL title game, 17-13.

Also that season, Tunnell mentored free-agent rookie Willie Wood about how to play the safety position, as well as returning punts.

By 1961, Tunnell had been replaced by Wood at safety as a starter, but his lessons to Wood were well spent. Wood had five interceptions that year, plus led the NFL in punt returns, as he had a 16.1 return average and two returns for touchdowns.

On top of all that, the Packers won the 1961 NFL title, as they defeated Tunnell’s old team, the Giants, 37-0 at City Stadium (later Lambeau Field).

It was Tunnell’s second NFL title, as he had also been part of a Giants team which won the 1956 NFL championship.

Tunnell retired after the 1961 season and in 1967 he was inducted into the Pro Football Hall of Fame.

When I talked to Kramer about Tunnell, he recalled No. 45 very fondly.

“Emlen was a pretty special guy,” Kramer said. “He was a pro’s pro. He was a classy and bright guy as well. Emlen was a fierce competitor. He also helped tutor the young defensive backs like Willie Wood and Herb Adderley.”

“We were playing the Chicago Bears one time,” Kramer said. “The Bears had a fine guard by the name of Stan Jones. The Bears ran a play, kind of like a sweep, with the guards pulling. Emlen came up to force the play, and his timing was impeccable, as he hit Jones with a forearm to the head and knocked him colder than a cucumber.”

One can see how the teaching of Tunnell impacted both Wood and Adderley, as not only were both players fabulous ball hawks, but both were also outstanding tacklers who delivered a resounding hit more times than not.

Kramer knew that Tunnell would be able to teach the younger players.

“Emlen just really understood the defensive positions,” Kramer said. “He knew where everyone should be on a given offensive formation. He was just a steadying influence.”

After he was done playing in the NFL, Tunnell later became a scout and assistant coach for the Giants.

Tunnell also was a bit of a celebrity when he joined the Packers after playing so many years in the Big Apple. Tunnell also knew many celebrities.

Kramer recalled a couple of instances.

“In San Francisco, Ella Fitzgerald was playing one night,” Kramer said. “When we went to the show, everyone knew Emlen. Everyone. He was just a social cat. Anyway, Fuzzy and I were hanging out with him watching the great show from Ella from up close. It was just wonderful.

“Then another time we were in Milwaukee one night and Ray Charles was performing in this hotel. We went in to watch him during his second session, as he had already done an early show.

“Fuzzy, myself and some other players quietly found a table near the back. Emlen saw us and he told us to follow him. Ray was sitting at the piano getting ready to start his set, while Emlen had the help get us a bunch of chairs and then put them around the piano. We were sitting six feet away from Ray having a beer while he was performing. It was a priceless moment.”

Still, he left behind a great legacy, both on the field and off.

“Emlen was a class act,” Kramer said. He was a hell of football player, as well as being a hell of a man.”