As the 4-0 and eighth-ranked Wisconsin Badgers prepare to take on the 4-0 and fifth-ranked Michigan Wolverines on Saturday afternoon at Michigan Stadium in Ann Arbor, the team from Madison has been hit with some tough injury news.

First,  it was announced this week that kicker Rafael Gaglianone, 7 of 8 on field-goal attempts through three games (including the game-winner vs. LSU), would miss the rest of the season after undergoing back surgery.

Then late on Thursday, it was announced that outside linebacker Vince Biegel is expected to be sidelined several weeks after suffering a broken foot.

Both of those injuries will be difficult to overcome, especially the one to Biegel.

Biegel, who is a senior, was named third-team All-Big Ten in 2015. This year, No. 47 has nine tackles, including two for loss, and two hurries. His pressure against LSU quarterback Brandon Harris resulted in the victory-clinching interception in the opener.

Both Biegel and fellow outside linebacker T.J. Watt have played the run extremely well through four games, plus have put constant pressure on opposing quarterbacks. Watt leads the Badgers in sacks with 4½ and in tackles for loss with 5½.

Time will tell who defensive coordinator Justin Wilcox will call upon to take Biegel’s place at outside linebacker. Wilcox has a couple of options.

One would be to put redshirt freshman Zack Baun, Biegel’s backup, into the starting lineup opposite T.J. Watt.

Another would be to move redshirt junior Jack Cichy from inside linebacker into Biegel’s spot and move redshirt sophomore Ryan Connelly into Cichy’s spot. Cichy leads the Badgers with 23 tackles.

Luckily for the Badgers, their linebacker corp is the deepest and most talented position group on the team. That being said, it will be very tough to replace Biegel.

Both the Badgers and the Wolverines are also 1-0 in the Big Ten. This has to be the biggest game that the two teams have played against each other in over a decade.

The last time these two teams met was when the Badgers rolled to a 48-28 victory at Ann Arbor in 2010. Current head coach Paul Chryst was the offense coordinator for Wisconsin in that contest.

The Badgers will be making their second straight weekend trip to the state of Michigan, as Wisconsin is coming off of a very convincing 30-6 victory over the Michigan State Spartans last Saturday in East Lansing.

That win was the second one in which the Badgers had defeated a top-10 opponent this season, with the first one being the victory against LSU at Lambeau Field.

The Badger defense will have a big test on Saturday against Michigan.

The Wolverine offense has been fantastic so far, cranking up 45 points or more in each of the first four games versus Hawaii, UCF, Colorado and Penn State.

The Wisconsin defense figures to put up a much bigger fight however.

The Badgers allow just 80.5 yards per game on the ground, which has them ranked 10th nationally.

Michigan rolled up 326 rushing yards in last Saturday’s 49-10 trouncing of Penn State. The Wolverines are averaging 229.8 yards per game toting the rock. For Wisconsin to get a win on Saturday, they definitely have to stop the run.

Senior running back De’Veon Smith leads the Wolverines with 259 rushing yards and averages an impressive 6.6 yards per carry.

As a group, the Badgers rank seventh nationally in scoring defense (11.8 points per game) and 12th in total defense (277.0 yards per game).

In passing defense, the Badgers are tied for 10th nationally with six interceptions.

The Badgers will be facing quarterback Wilton Speight, who has performed well as a first-year starter for the Wolverines. Speight has thrown nine touchdown passes against one interception while completing 63.2 percent of his passes for 875 yards. 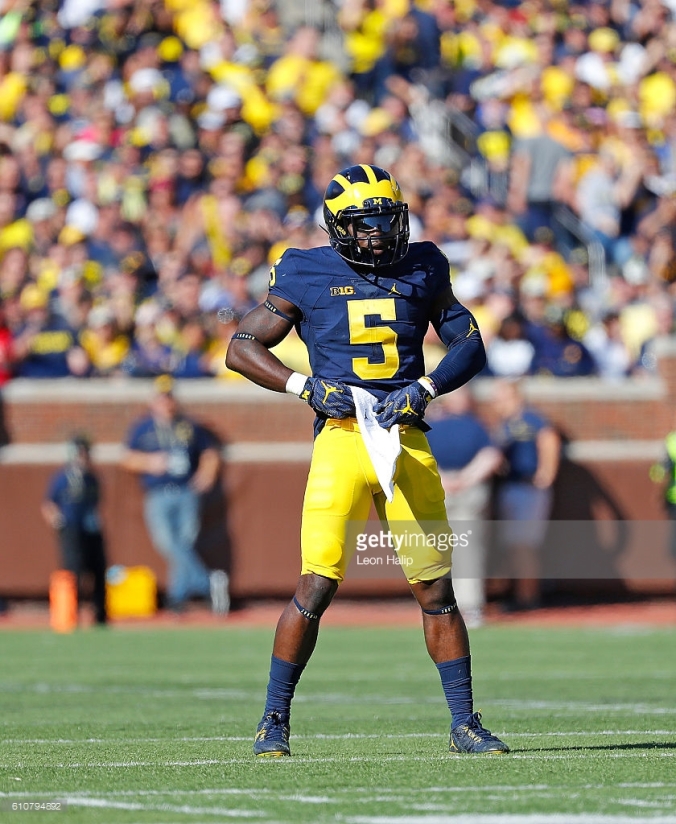 The player to watch on Michigan is definitely sophomore Jabrill Peppers. Peppers can do it all. He is force on defense, plus is an exceptional kick returner. And like former Heisman Trophy-winning Wolverine Charles Woodson, Peppers likes to play on offense at times as well.

“He’s made it clear he wants to do as much as possible,” head coach Jim Harbaugh said. “That isn’t in question. There’s no question that all of our coaches, special teams, offense and defense, they’re like a bull with their paw in the ground, they want Jabrill involved.”

Chryst is definitely is aware of Peppers as well.

“He does a lot of the little things that are kind of reserved for when you specialize in it,” Chryst said. “That’s what’s impressive: his knowledge and awareness of the game. Clearly as an athlete, he’s special, but I think the football part of him — the understanding — that’s what to me really makes him. He’s got to be the best player in college football right now.”

Peppers has rotated playing both at safety and linebacker for the Wolverines and has been outstanding. Peppers already has 9.5 tackles for a loss and ranks second on the Wolverines with 33 tackles. He also leads the Big Ten with a 22.7-yard punt return average and has already had three returns of 50 or more yards (two punts, one kickoff).

The Wisconsin offense will certainly have to be aware of Peppers and the 11th-ranked Michigan defense.

Redshirt freshman quarterback Alex Hornibrook of the Badgers will be getting his second career start on Saturday, and he will be aiming to follow up on a strong effort last week versus the Spartans.

Hornibrook was unflappable, as he passed for 195 yards, one touchdown and one interception against the Spartans.

The Badgers will need to exploit the biggest weakness of the Wolverines on defense, which is stopping the run. Michigan is ranked just 40th in stopping the run and have given up 122.5 yards per game.

Wisconsin has not been bad in running the football so far in 2016 (184.3 yards per game), but to win on Saturday, they will need an impressive effort by Corey Clement and company.

Clement leads the Badgers in rushing with 251 yards  and five touchdowns. Dare Ogunbowale has also chipped in 182 yards and another touchdown.

Overall on offense, the Badgers are second in the nation in time of possession, as they have held the ball an average of 37 minutes per game. If that comes close to happening again on Saturday versus the Wolverines, Wisconsin will have a solid shot of winning.

Special teams will be key in a game like this, and the Badgers obviously have to be aware of the return skills of Peppers.

With a game like this looming, it’s always a pleasure to get the perspective of NFL scout Chris Landry. I occasionally write for Landry on his website and his takes about college and pro football are always insightful.

Landry talked about the Wisconsin versus Michigan matchup on 620 WDAE’s Steve Duemig Show on Wednesday.

“Hey listen, I’m going to tell you something,” Landry said. “Wisconsin has looked better and better. They were not that impressive against LSU when they beat LSU. But they have gotten better. [Alex] Hornibrook has allowed them to attack a little bit in the passing game.

“Michigan, who I think has been overrated, and I still do to some degree, they are getting a little bit more impressive on film. Their Front 7 is pretty good defensively. They are tough and physical on offense.

“I can’t wait to watch this game. I think this is going to say a lot. I like Michigan a little bit at home, but don’t be surprised here. This would not be that big of an upset [if Wisconsin wins]. Only in terms that it’s on the road.

“Wisconsin is playing well. Certainly they are playing the best in the West. Iowa is struggling on the offensive line and at quarterback. Nebraska is good, but not quite there yet. This Wisconsin team is interesting and we’ll see how much better.

“Let me caution that Wisconsin is getting into the meat of their schedule. And they were very impressive last week [against Michigan State]. If they win this week, we can really start talking about the Badgers a little bit more.”

I agree with Landry. I would not be shocked at all if Wisconsin comes out of this game with a victory.

Add to that, the Badgers have to be coming into this game with a chip on their shoulder. I mean, they have beaten two top-10 teams for the first time since the 1962 season, yet are still 10 ½-point underdogs versus the Wolverines.

This just a week after Wisconsin upset eighth-ranked Michigan State 30-6 at East Lansing. After that game, Biegel tweeted, “Keep sleeping on Wisconsin.”

But Biegel will not be on the field this Saturday like he was just a week ago.

Still, the Badgers have been playing with a next man up attitude all season long, whether it’s been at quarterback, running back, linebacker, tight end or on the offensive line.

That mantra has put the Badgers at the precipice of perhaps beating their third top-10 opponent of the 2016 season. And it only gets tougher down the road with No. 2 Ohio State coming to Camp Randall in a couple of weeks to play the Badgers.

Bottom line, time will tell if the Badgers can continue on this historical run they are on in terms of beating top-10 opponents.

I know this much, I won’t be surprised if Bucky Badger comes away with another top-10 win on Saturday at “The Big House” in Ann Arbor.

2 thoughts on “A Scout’s Take on the Wisconsin vs. Michigan B1G Matchup”