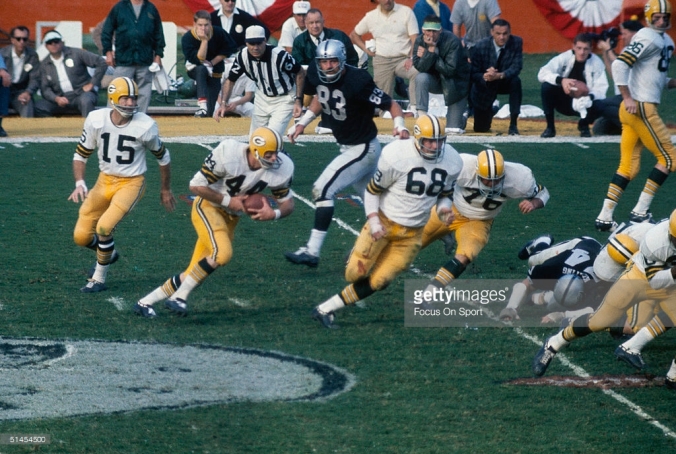 Left guard Gale Gillingham (No. 68) leads the way for Donny Anderson (No. 44) in Super Bowl II vs. the Oakland Raiders.

From 1959 through 1966, the Green Bay Packers had the best set of guards in the NFL with right guard Jerry Kramer and left guard Fuzzy Thurston leading the way.

Kramer was drafted by the Packers in the fourth round of the 1958 NFL draft, while Thurston was acquired in one of the first trades head coach and general manager Vince Lombardi ever made in 1959.

The duo of Kramer and Thurston became a very effective combination, especially blocking on the the signature play of the Packers…the power sweep.

Kramer and Thurston were recognized for their outstanding play as well.

In 1964, Kramer missed most of the season with an intestinal ailment which saw him undergo nine medical procedures before the situation was finally resolved.  Meanwhile, Thurston was named second-team All-Pro by NY.

In 1965, Kramer was able to get back in the starting lineup lineup after a few games after arduous rehab, while Thurston was also fighting some injury issues that year. Neither player was recognized for their play that season.

During that time, the Packers won four NFL titles and the very first Super Bowl.

Thurston loved to tell anyone who would listen, “There are two good reasons the Packers are world champions. Jerry Kramer is one of them, and you’re looking at the other one.”

But in 1967, Thurston hurt his knee in a scrimmage early in training camp and was replaced by a strapping young guard by the name of Gale Gillingham. The former Minnesota Gopher was in his second year with the Packers that season after being drafted in the first round of the 1966 NFL draft.

I talked with Kramer recently and he talked to me about Thurston and how he worked with Gillingham.

“Fuzzy sat besides Gilly for the rest of the ’67 season, ” Kramer said. “He coached Gilly. They sat together in every film session. Fuzzy gave him the benefit of everything he had learned about the defensive tackle that Gilly would be facing that given week.

“Fuzzy told Gilly what he liked to do against that tackle and told Gilly that he should think about doing the same thing. Basically, Fuzzy was Gilly’s personal coach.”

In the 1967 season, Kramer was named first-team All-Pro by AP, UPI and NY. Gillingham had taken over for Thurston and never looked back, as the Packers won their third straight NFL title, along with their second straight Super Bowl win. 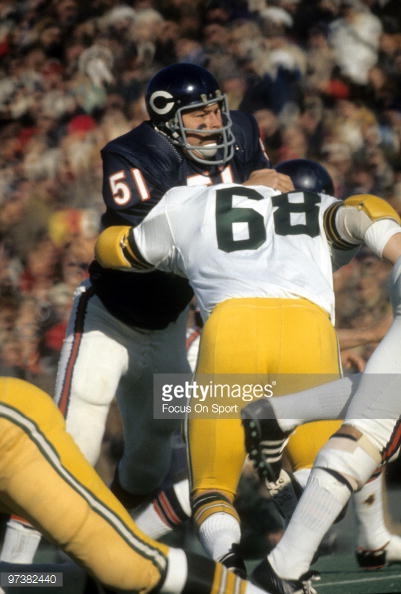 Kramer talked about how Gillingham fit in for the Packers that season.

“I really enjoyed Gilly,” Kramer said. “He was a good kid. He was a hard-working kid. He was not a smart ass and he listened to you. He was respectful and really was a wonderful kid.

“Gilly was also a hell of a ballplayer with great size and speed. I remember Forrest [Gregg] and I would always win our offensive line sprints all the time until Gilly became a starter. We just couldn’t beat Gilly in our races, even when we tried to cheat a little bit.

“Finally, Forrest looked at me one day and said, ‘We might as well give up Jerry. We ain’t going to beat him.’

After the 1968 season, Kramer had retired and Gillingham moved over to right guard. No. 68 became one of the best players at his position for the next several years.

In 1971, Gillingham was named first-team All-Pro by NEA, which was also the first season that Dan Devine was the head coach of the Packers.

Speaking of Devine, a few months ago I wrote a story about his miscalculations at the quarterback position during his tenure in Green Bay.

As bad as those decisions were at quarterback by Devine, the worst decision he ever made was moving Gillingham to defensive tackle for the 1972 season.

It made very little sense. Yes, Gillingham had played a little defensive tackle in college for Minnesota, but at the time Devine made the move, Gilly was probably the best right guard in the NFL.

And because the team was lead by second-year quarterback Scott Hunter in 1972, the team would have to to depend on the running game to be successful on offense. John Brockington and MacArthur Lane combined for almost 2,000 years rushing that season, but just imagine their amount of success with Gillingham at right guard.

Instead, Gillingham injured his knee early in the ’72 season playing defensive tackle and would miss the rest of the campaign that year.

Kramer talked about that decision by Devine.

“That was stupid,” Kramer said. “That really was a stupid move. That’s the only thing I can say about that. It just boggles your mind taking a kid of that caliber and quality and then move him to a whole new position. It just doesn’t make any sense.”

Also in ’74, Gillingham was named to play in the Pro Bowl, which was the fifth time he had been named to that squad.

In 1975, which was Bart Starr’s first year as head coach of the Packers, Gillingham sat out the season, as he didn’t want to play under offensive line coach Leon McLaughlin.

Gillingham talked about that situation in an article written by Martin Hendricks of Packer Plus in August of 2011.

“I had no faith in the line coach and didn’t fit into the system,” Gillingham said. said. “I wanted to be traded.”

Gillingham did return to play in 1976 under McLaughlin and Starr, but after a 5-9 season, No. 68 decided that he was done playing football in the NFL and he retired.

The losses finally caught up with Gillingham. From 1968 through 1976, the Packers were just 54-67-5 with just two winning seasons.

“The losing killed me,” said Gillingham. “I was burned out and beat up both mentally and physically.”

Tragically, just a few months after the article by Hendricks was written, Gillingham died of a heart attack at his home in Minnesota while lifting weights. Gillingham was just 67 years-old.

Gillingham was inducted in the Packers Hall of Fame in 1982.

Anyone who has ever read my stories over the past decade or so, know that I have been a huge proponent of Kramer getting his rightful induction into the Pro Football Hall of Fame.

The same holds true about Gillingham.

Had Devine not made that colossal mistake of moving Gillingham to defensive tackle in 1972, there is no doubt that Gillingham would have received more All-Pro honors that season at guard and he may have eventually been named All-Decade in the 1970s at right guard.

Kramer received that same honor in the 1960s, plus in 1969 was named to the NFL’s 50th anniversary team by the Pro Football Hall of Fame. Kramer is the only member of that prestigious team not in Canton. 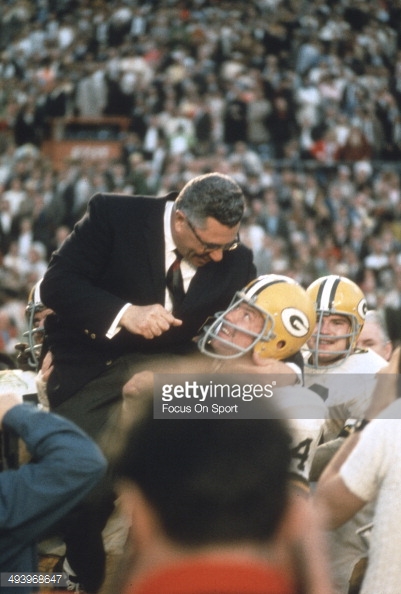 Kramer talked about what made Gillingham such a great offensive guard.

“He was a bright kid,” Kramer said. “He would listen. He would also learn quickly when you taught him something. Gilly had no arrogance about him and he wasn’t afraid to learn. He had the drive, the emotion, the push, the need, the want, the fire and the whole thing there.

“He had great size, strength and speed. Gilly had all the components. Plus, he was willing to learn, which made him an even better player. Gilly was also a very polite kid.

“Gilly fit in with Fuzzy and I like we were three brothers. We looked after him and he looked after us and it was just a wonderful relationship. There was an admiration and love for him, just like he was family.

“That kind of thing permeated on our team under Coach Lombardi with the players. You had that respect and love for the players because they would perform when it counted. Players like Gilly definitely made a positive impact on our team and he certainly played well when it was crunch time.”