Since Aaron Rodgers became the starting quarterback of the Green Bay Packers in 2008, the team has won the NFC North four times and gone to the postseason seven straight times.

If the Packers beat the Detroit Lions on Sunday night at Ford Field, it will be five NFC North titles and eight straight trips to the playoffs.

All I know is that the Lions should expect another great performance by Rodgers on national television (NBC) Sunday evening.

Rodgers almost always plays well versus the Lions. The same thing holds true for the other members of the NFC North…the Chicago Bears and Minnesota Vikings.

In his career against those three teams, Rodgers is 38- 13. In those 51 games, Rodgers has thrown 107 touchdown passes versus just 21 interceptions for 12,728 yards. That adds to to a cumulative passer rating of 108.6.

If you just look at his touchdown pass to interception ratio in his career versus NFC North opponents, Rodgers has been humming along at a five to one clip. That is truly mind-blowing.

Against the Lions, Rodgers is exactly at a five to one ratio, as he has thrown 30 touchdown passes versus just six picks for 3,758 yards. No. 12’s career passer rating against the Lions is 108.0.

Rodgers is also 12-3 in his career against Detroit.

Rodgers doesn’t just hurt the Lions, Vikings and Bears…oh my…with just his arm either. He can scamper for yardage via the run about as good as any quarterback in the NFL.

Versus Detroit, Chicago and Minnesota, Rodgers has run for 697 yards and seven touchdowns in his career. Even with a bad calf last Sunday against the Vikings at Lambeau Field, Rodgers ran six yards for a touchdown, while making a nice move near the goal line as he dove into the end zone.

Rodgers has been playing out of his mind the latter part of the 2016 season, which also includes the stretch of three games against NFC North opponents to end the season.

Starting with the game against Washington in Week 11, when the Packers lost on Sunday night, Rodgers has thrown 14 touchdown passes without throwing a pick. In those six games, No. 12 has had a passer rating of over 100 in five of those contests.

Plus, it was Rodgers who threw a 60-yard bomb to wide receiver Jordy Nelson with less than a minute to go on third down, which set up the game-winning field goal by Mason Crosby in the 30-27 victory by the Packers.

Sunday night will be the first visit to Ford Field by Rodgers and the Packers since the Miracle in Motown game on December 3, 2015.

The Packers were down 23-21 with just seconds remaining to the Lions when Rodgers and the Packers were saved by a facemask penalty against Detroit’s Devin Taylor on what would have been the final play of the game.

The penalty allowed one more opportunity for Rodgers to lead the Packers to a miraculous finish.

The Packers were on their own 39 yard line and Rodgers was going to need some time to launch a pass to the opposite end zone. That’s if he could get it there.

Rodgers was able elude the three-man rush, first going left, then scrambling to the right and then running up to launch his moon-rocket pass that went way up into the air and traveled close to 70 yards. 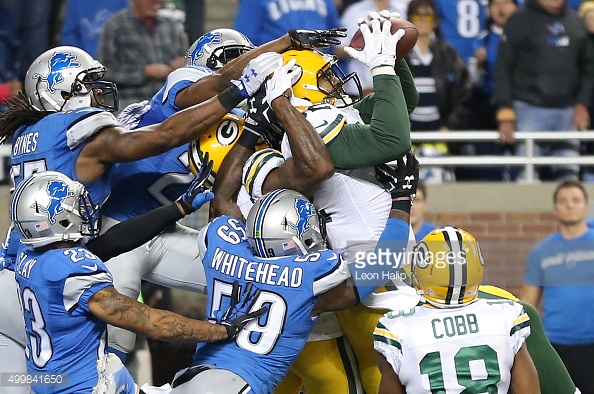 Tight end Richard Rodgers of the Packers leaped up and caught the ball at it’s highest point in the end zone surrounded by several players from both teams.

The result? The Rodgers to Rodgers combination had secured a 27-23 victory over the Lions on that phenomenal  61-yard touchdown pass.

This Sunday night will be the fourth straight year the Packers will be playing for the NFC North title in Week 17.

Rodgers was finally cleared to play against the Bears in that game, after ironically breaking his collarbone against Chicago in Week 8 that season, which caused him to miss seven games.

Although Rodgers appeared to be a bit rusty due to his layoff, No. 12 threw for 315 yards with two touchdown passes versus two picks.

But the second touchdown he threw in that game was one that will live on in Green Bay lore. With 46 seconds to go in the game and with the Packers trailing the Bears 28-27, Rodgers and the Packers faced a fourth-and-8 scenario.

In the moment of truth, Rodgers first avoided being sacked by current Packer Julius Peppers by sprinting to his left and getting a chip-block by fullback John Kuhn. Rodgers then delivered a 48-yard touchdown pass on the move to wide receiver Randall Cobb.

In 2014 against the Lions at Lambeau Field, it was once again a winner-take-all game for the NFC North crown.

Rodgers had hurt his calf the week before against the Tampa Bay Bucs at Raymond James Stadium and was really limited in terms of mobility.

Both the Packers and the Lions were 11-4 going into the game. Things started out well enough, as Rodgers had the fans at Lambeau cheering wildly for one fleeting moment and then sitting in hushed silence quickly thereafter.

That’s what happened when Rodgers threw a four-yard touchdown pass to Cobb with three minutes and 55 seconds left in the first half to take a 14-0 lead over the Lions.

But even before the pass was in Cobb’s hands, Rodgers crumpled to the turf. No. 12 didn‘t get up either. He clutched at his left calf writhing in pain. Rodgers had to be helped off the field by the training staff and moments later was driven to the locker room in a cart.

Things didn‘t get much better after that. It didn‘t help matters when the Lions came right back and scored a touchdown just before halftime.

When the Packers came out for the second half, there was no sign of Rodgers. Backup quarterback Matt Flynn was warming up and it was Flynn who took the snaps on the first series of the second half. The series went nowhere after Flynn was sacked on third down.

Just a moment later, the crowd roared as Rodgers gingerly walked out of the tunnel and toward the bench of the Packers.

The urgency of the game quickly changed as well, as the Lions quickly came back to score another touchdown and the game was tied 14-14.

Then in the fourth quarter, Rodgers finished another drive with a one-yard quarterback sneak for a touchdown which put the Packers up by two scores. The sneak happened in the south end zone—the same place where Bart Starr scored on his legendary sneak in the “Ice Bowl” game.

This game certainly added to the Rodgers’ legend, as the Packers ended up winning 30-20.

Last season, the Packers once again played for the NFC North title versus the Vikings in Week 17 at Lambeau Field. Both teams went into the game with 10-5 records.

Rodgers was under constant pass-pressure in the game, as the team started Josh Sitton at left tackle due to the ankle injury suffered by David Bakhtiari two weeks earlier.

Rodgers was sacked five times in the game, but he did throw for 291 yards, with a touchdown and an interception, but Green Bay lost 20-13.

This sets up the fourth straight year that Rodgers and the Packers can win the NFC North versus a NFC North opponent. That is very apropos.

One thought on “Green Bay Packers: Aaron Rodgers is the King of the Castle in the NFC North”