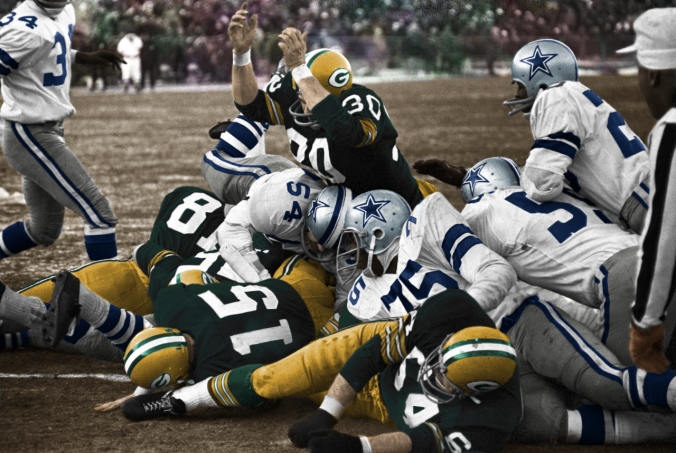 Back in October, I wrote an article in which Bart Starr, Jr. responded to a perception that his father did not endorse Jerry Kramer’s enshrinement into the Pro Football Hall of Fame.

That viewpoint was out there because of some comments made by Peter King of Sports Illustrated. In fact, this is what King wrote in his MMQB mailbag chat with one of his readers, just a couple of weeks before Kramer was nominated as a senior candidate by the Seniors Selection Committee of the Pro Football Hall of Fame on August 23:

Finally, a few years ago, I asked Bart Starr if there was anyone else he thought had been forgotten unjustly in the Hall process, and he said left tackle Bob Skoronski. He was effusive in his praise of Skoronski. I asked him if he wanted to mention anyone else, and he said no. Did he forget Kramer? I suppose it’s possible. But I gave him his chance, and he didn’t mention Kramer.

This was not the first time King has brought up the conversation he had with Starr either.

When I mentioned that to Bart Jr., he thought that his dad’s comment to King was misinterpreted.

Starr may have mentioned Bob Skoronski, because he felt that No. 76 was one of the unsung teammates of his who he felt deserved a place in the Pro Football Hall of Fame.

In terms of Kramer, Starr had always felt that No. 64 deserved a place in Canton and should have been inducted decades ago, when Starr and many of his teammates were inducted.

Bart Jr. also mentioned that his father had been suffering from some memory loss and dementia issues around the time of this interview with King, which also may explain his response.

Starr was inducted into the Pro Football Hall of Fame in 1977, along with teammate Forrest Gregg. Many of his Green Bay teammates followed over the next decade. Players like Ray Nitschke, Herb Adderley, Willie Davis, Jim Ringo and Paul Hornung.

That was the period in which Starr felt Kramer should have been inducted.

Starr was enshrined because of his great career in Green Bay, as he led the team to five NFL titles in seven years, which included the first two Super Bowls. Starr was the MVP in both Super Bowl I and Super Bowl II.

As a matter of fact, Starr is the highest-rated quarterback in NFL postseason history with a 104.8 mark. Starr led the Packers to a 9-1 record in ten games. Starr threw 15 touchdown passes versus just three picks for 1,753 yards in those 10 games.

Starr’s most famous play in the postseason involved Kramer. It was his legendary quarterback sneak in the closing seconds of the 1967 NFL Championship Game (better known as the “Ice Bowl”) versus the Dallas Cowboys at Lambeau Field.

That game was played under arctic conditions that day, as the game-time temperature was 13 degrees below zero. If you added in the wind, it was bone-chillingly cold, as there was a minus-48-degree windchill for the game. But when it counted most, with 16 seconds to go and no timeouts, Starr followed a classic block by Kramer on Jethro Pugh of the Cowboys, as he shuffled happily into the end zone, scoring the winning touchdown in the 21-17 epic win.

Back to my discussion with Bart Jr. now. A day after our conversation in October, he sent me a text which spoke to King’s comments about his father.

Hi Bob- Peter may be pleased to know that today we mailed a letter to the Hall of Fame on behalf of Jerry. Dad’s endorsement could not have been stronger or more sincere. Our entire family has been among Jerry’s greatest admirers for more than 50 years, and we look forward to celebrating with the Kramer family in Canton.

Thank you and very best wishes,

Since that letter was sent, I have received a copy of the note. Here is that heart-felt letter from Cherry Starr writing on behalf of her husband Bart.

On February 3 (the day before Super Bowl LII), the 48-person selection committee will vote on the Class of 2018 for the Pro Football Hall of Fame. Later that day after the voting has been finalized, this is what I envision will happen:

Kramer will get a knock on his Minneapolis hotel door by David Baker, the President and Executive Director for the Pro Football Hall of Fame.

After Kramer opens the door, this is what he will hear from Baker, “Jerry, it is my great pleasure to tell you that you will be going into the Pro Football Hall of Fame as one of the greatest players, coaches and contributors to ever play this game.”

7 thoughts on “The Bart Starr Endorsement Letter for Jerry Kramer”