It’s one of the most iconic plays in NFL history. I’m talking about Bart Starr’s legendary quarterback sneak in the 1967 NFL title game, better known as the “Ice Bowl”, as the Green Bay Packers defeated the Dallas Cowboys 21-17 in the final seconds of the game.

That touchdown gave the Packers their third straight NFL championship, a feat that has never been duplicated in the playoff era of the NFL dating back to 1933.

Two weeks later, the Packers won their second straight Super Bowl as well, as they defeated the Oakland Raiders 33-14.

But it was Starr’s QB sneak that made all of that possible.

It was most definitely the signature moment in the legacy of Vince Lombardi during his time in Green Bay as head coach and general manager.

That play was set up by one of the most fabulous drives in the history of the Packers.

Here was the situation:

The Packers got the ball back at their own 32-yard line with just 4:50 remaining in the game. Somehow the Packers were going to have to trudge 68 yards across a truly frozen tundra to win the game.

“I asked Bart about that years later, about what made him think we could go 68 yards and score a touchdown after we had made minus-nine yards on 31 plays prior to that,” Kramer said. “Bart said, ‘Jerry, I came into the huddle and started to say something. Then I looked in your eyes, I looked at Forrest’s eyes and everyone else in the huddle, and I knew I didn’t have to say anything. So all I said was, ‘Let’s go.’

I wrote about that mythical drive in December, just two days before the 50th anniversary of that historical NFL game. Kramer, halfback Donny Anderson and fullback Chuck Mercein shared their thoughts about that improbable trek across the ice.

The play which won the Packers their fifth NFL title in seven years was called earlier in the week when the team was studying the defensive tendencies of the Cowboys. Kramer actually suggested the play to Lombardi.

“Jethro [Pugh] was high, and I actually suggested that play on Thursday when we were studying short-yardage films. I said we could wedge Pugh if we had to. And Coach Lombardi said, ‘What?’ And I said that we can wedge Pugh if we have to. So we ran the film back three or four times, and coach says, ‘That’s right. Put in a wedge on Pugh.’

The do-or-die situation in the game came down to the Packers having just 16 seconds to go with no timeouts at the Dallas 1-yard line.

Starr called a 31 Wedge play in the huddle (the same play discussed on Thursday), which calls for the fullback to get the ball. However, after conferring with Lombardi, Starr decided to keep the ball due to the slippery conditions near the goal line.

Starr followed Kramer’s classic block on Pugh (with help from center Ken Bowman) and No. 15 tumbled happily into the end zone for the winning score and NFL immortality.

But history might have been different had Starr tried to cross the goal line with the football in his right arm and not his left.

I mentioned that scenario to Boyd Dowler when we talked recently and he said, “I didn’t realize that.” 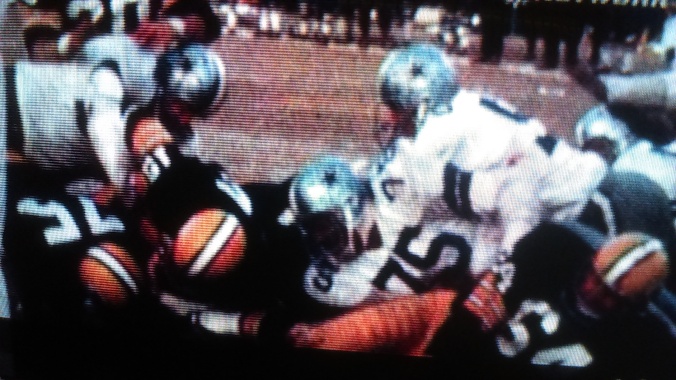 The reason why that was so important is because Chuck Howley, who was the left outside linebacker of the Cowboys, quickly dove into Starr just as he was about to get into the end zone. Howley tried to rip the football from Starr’s empty right arm. Had Starr carried the football in that arm, who knows what may have occurred?

Starr had fumbled earlier in the game during the second quarter, which led to a George Andrie touchdown after he recovered the fumble by No. 15.

The bottom line is that Starr not only called the right play (31 Wedge) and the right way to score on that play (via his sneak), but also the correct way to handle the ball as he made his way triumphantly into the end zone.