When the 9-2 (6-2) Wisconsin Badgers take on the 10-1 (7-1) Minnesota Golden Gophers this Saturday afternoon at TCF Bank Stadium, three big awards will be at stake for the winner of the game.

For one, the winner will win the Big Ten West title and the right to play Ohio State in the Big Ten title game in Indianapolis on December 7.

Another honor that will go to the victorious team is the right to have possession of Paul Bunyan’s Axe.

Finally, the winner of the contest will have the series lead in a border battle that dates back to 1890 and is the longest, uninterrupted rivalry in FBS Division I college football.

The Badgers have only led in the overall series just once and that was when the Badgers beat the Gophers 31-0 at TCF Stadium in 2017.

Up until that point, Wisconsin had never led in the series. Not once in 127 years. Wisconsin can do that for just the second time with a victory on Saturday.

In terms of the Paul Bunyan Axe, that reward for winning has gone on since 1948. Wisconsin leads by a 43-25-3 margin over Minnesota over that time.

But because of Minnesota’s somewhat shocking 37-15 win over Wisconsin last year at Camp Randall Stadium, the Gophers now own the axe. But a win on Saturday afternoon will see the Badgers running across the football field to retrieve what was theirs for 14 straight years from 2004 through 2017.

Winning back the axe and taking the overall series lead are both great goals and will mean a lot. But the biggest prize will be in winning the Big Ten West.

The game will see two of the better coaches in the Big Ten going at each other for the fourth time and the third time in Big Ten play.

I’m talking about Paul Chryst of the Badgers and P.J. Fleck of the Golden Gophers.

Shortly after the game, Fleck accepted the head coaching position at Minnesota.

In 2017, the Gophers finished 5-7 under Fleck, and then 7-6 in 2018 which included a win against Georgia Tech in the Quick Lane Bowl in Detroit. That bowl appearance was set up by the surprising win over the Badgers last year in Madison.

In 2019, the Gophers have turned heads in the FBS and the Big Ten with their performance thus far under Fleck. Overall as a head coach at Minnesota thus far, Fleck is 22-14 and 1-0 in bowl games.

Chryst has been the head coach at Wisconsin since 2015 and currently has an overall record of 51-14. That includes two Big Ten West titles, plus the Badgers are 4-0 in bowls under Chryst, which includes wins in the Cotton and Orange Bowls.

Fleck is a favorite to win that award this year. 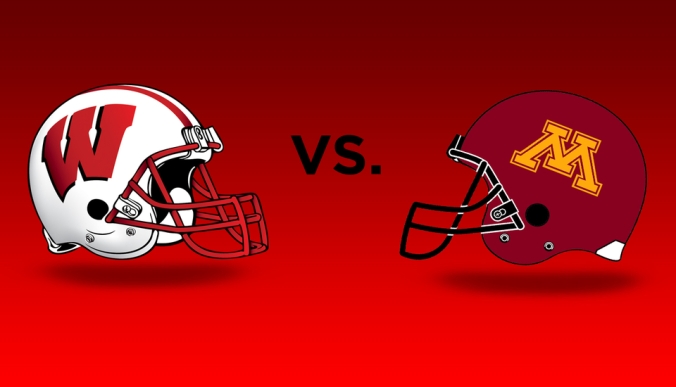 All that being said about the coaches going into this game, it will be the players who will determine the outcome of this important contest.

Running back Rodney Smith leads the way in the running game, as he has rushed for 1,063 yards and has scored eight touchdowns. Mohamed Ibrahim (425 yards and six TDs) and Shannon Brooks (386 yards and two TDs) also get touches toting the rock.

When running the wildcat formation, the Gophers utilize Seth Green to handle the snaps. Green has rushed for 88 yards and five touchdowns.

Quarterback Tanner Morgan is sixth in the FBS in passing efficiency and is having a great season. Morgan has thrown 26 touchdown passes versus just five interceptions for 2,679 yards.

The two main weapons that Morgan utilizes are wide receiver’s Tyler Johnson and Rashod Bateman. Johnson (66-1,025-10), while Bateman (51-1,023-10) receptions almost mirror each other in production.

Minnesota will be facing another fine defense from Wisconsin put together by defensive coordinator Jim Leonhard.

The 12th-ranked (AP) Badgers are seventh in the FBS in total defense and have allowed just over 268 yards per game. Wisconsin is also eighth in scoring defense, as they give us just a tad over 14 points per game.

The defense is once again led by the talented linebacker corp that Leonhard always seems to put together. Chris Orr is tied for fifth in the FBS with 11 sacks, while Zack Baun is tied for 14th with 9.5 sacks.

Orr leads the Badgers in total tackles with 64 and is followed by fellow linebacker Jack Sanborn with 57. Baun is next with 53 tackles.

The Badgers have 10 interceptions and two of those have been returned for touchdowns. Safety Eric Burrell leads the way with three picks, plus has 39 tackles. Sanborn also has two interceptions.

The offense is led by running back Jonathan Taylor, who is second in the FBS with 1,685 yards rushing and 18 touchdowns.

Taylor has 5,856 yards rushing is his three-year career at Wisconsin so far and has 47 career rushing touchdowns. That is tops all time in NCAA history in terms of rushing yardage in just three years of play.

Taylor is second all time in terms of yards rushing in Big Ten history and Wisconsin history.

The only running back in front of him in both cases is Ron Dayne, who won the Heisman Trophy with the Badgers in 1999 and had 7,125 yards rushing in his career.

By the way, in two games versus the Gophers, Taylor has rushed for 269 yards and a touchdown.

When throwing the football, quarterback Jack Coan has been very efficient for the most part. In fact, Coan is ranked 14th in the FBS in passing efficiency. Coan has thrown 15 touchdown passes versus just four picks for 2,029 yards.

The Badgers will be facing a Minnesota squad which is ranked 10th in the FBS in total defense and gives up just a tad over 300 yards per game. The Gophers are tied for 27th in scoring defense, as they allow an average of 21 points per game.

The key player for Minnesota on defense is defensive back Antoine Winfield Jr., as he leads the team in tackles with 76, plus has seven interceptions. No. 11 also has three sacks.

In a big game like this, special teams play is very important. Cruickshank of the Badgers is 10th in the FBS in kick returns, as he averages 28.4 yards per return and has taken one to the house.

Jack Dunn of Wisconsin is 25th in the FBS in punt returns with a nine yard return average.

No one from Minnesota is in the top 50 in either one of those statistical categories.

In terms of blocked punts, the Badgers have one so far in 2019, while the Gophers have yet to block one.

Collin Larsh of Wisconsin is 10-of-15 in field goal attempts, while Zach Hintze of the Badgers nailed a 62-yard field goal last week against Purdue.

Michael Lantz of the Gophers is 6-of-9 in field goal attempts.

The bottom line is that Saturday’s game should be one hell of a game between these two rivals.

As I mentioned earlier, three big items are on the line.

– The overall series lead which dates back to 1890

One things is for sure. A member of the rodent family will be winning the Big Ten West.

Will it be a Badger or a Gopher?

Will Chryst be going back the the Big Ten title game for the third time with a chance to win his first Big Ten Title?

Or will Fleck be leading the Gophers to their first ever Big Ten title game?

We will find out Saturday in Minneapolis.