On Saturday February 4, the day before Super Bowl LI in Houston, we will find out who the Pro Football Hall of Fame will name to their Class of 2017.

One of the people who might get named to the upcoming class is the owner of the Dallas Cowboys, Jerry Jones. Jones is one of two contributor nominees for the Class of 2017. One person who will be rooting for Jones to get a bust in Canton is former Green Bay Packers great Jerry Kramer.

Kramer himself should have been inducted decades ago into the Hall of Fame and until that situation is rectified, there will always be a credibility issue at that venue.

That being said, I talked to Kramer recently and he told me about a brief meeting he had with Jones in Dallas in the early 1990s that he still regrets.

Kramer was at a function in Dallas when the Packers were playing the Cowboys in the NFC playoffs, which the Packers did for three straight years (1993-1995) in Big D.

Kramer explained how his mindset was working then.

“I had a couple interviews last week where I said some nice things about Jerry,” Kramer said. “I said I thought Jerry was a great owner and has done some great things for the NFL since he has owned the Cowboys.

“I was explaining my ignorance and attitude at that point in time in those interviews. Trying to explain that I was still competing and still fighting against the Cowboys instead of behaving myself like I should have.”

Kramer had reason to be in the competing mode, as he played in two of the most famous NFL title games in NFL history versus the Cowboys in 1966 and 1967.

The 1967 game was especially legendary, as it is better known as the “Ice Bowl” game. It was in this game in which Kramer executed the most famous block in NFL history.

The game was played under brutal conditions, as the game-time temperature was 13 degrees below zero. If you added the wind, it was bone-chillingly cold, as there was a minus-48-degree windchill for the game.

The situation came down to this: just 16 seconds to go with no timeouts at the Dallas 1-yard line and the Packers trailing the Cowboys 17-14.

Quarterback Bart Starr called a 31 Wedge play in the huddle, which calls for the fullback to get the ball. However, after conferring with coach Vince Lombardi on the sideline, Starr decided to keep the ball due to the slippery conditions near the goal line.

That play selection was called earlier in the week when the team was studying the defensive tendencies of the Cowboys. Kramer actually suggested the play to Lombardi.

“Jethro [Pugh] was high, and I actually suggested that play on Thursday when we were studying short-yardage films. I said we could wedge Pugh if we had to. And Coach Lombardi said, ‘What?’ And I said that we can wedge Pugh if we have to. So we ran the film back three or four times, and coach says, ‘That’s right. Put in a wedge on Pugh.’

Starr followed Kramer’s classic block on Pugh (who was high just as Kramer expected) and No. 15 happily tumbled into the end zone for the winning touchdown. 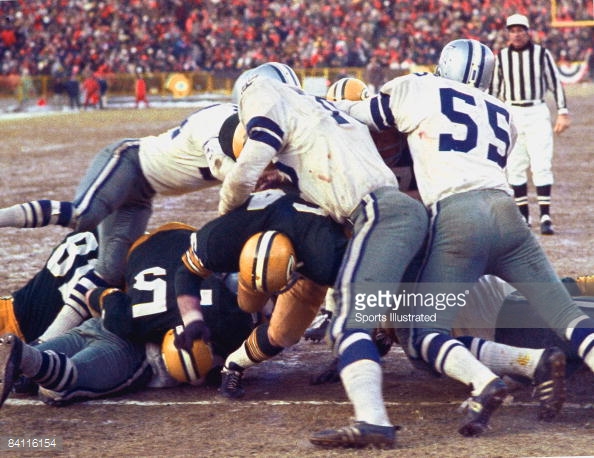 Those memories stayed strong in the mind of Kramer as he visited Dallas in the 1990s while the Packers took on the Cowboys for the right to move on in the playoffs.

Still, in retrospect, Kramer wishes that he would have been more receptive to Jones in their brief encounter.

Jones has a couple of things in common with Kramer. Besides being named Jerry, Jones also played guard at the University of Arkansas when the Razorbacks won the national title in 1964.

Not only did Jones play guard, but he was also a co-captain and was named All-Southwest Conference because of his play.

While it’s not known for sure, I would wager a bet that one of the players Jones looked up to in the NFL while he was playing guard in college was Kramer. After all, Kramer was considered the best right guard in the NFL at the time and ended up on the All-Decade team of the 1960s, not to mention the NFL 50th anniversary team.

While Arkansas and Jones won the national title in ’64, Green Bay and Kramer won five NFL titles in the 1960s, which included the first two Super Bowls.

Landry, who had coached the Cowboys from their infancy in 1960, was fired by Jones shortly after he purchased the Cowboys in 1989 and replaced by Jimmy Johnson, who was a teammate of Jones on that national championship team at Arkansas in 1964.

Landry had taken the Cowboys to five Super Bowls and had won two of them. Landry also led the Boys to 270 wins (regular season and postseason), which is currently the third-best mark in the history of the NFL.

Although the firing of Landry was not very popular in Dallas at the time, two straight Super Bowl wins under Johnson after the 1992 (Super Bowl XXVII) and 1993 (Super Bowl XXVIII) seasons deflected the anger in Cowboy Nation.

The Cowboys have not been back to a Super Bowl in over 20 years, but Jones has become one of the most powerful owners in the NFL.

One of his greatest endeavors was getting a new spacious and luxurious home for the Cowboys, which is now called AT&T Stadium in Arlington. The stadium, which was built in 2009, is also called “Jerry World” by some. Back in 2009, it was called Cowboys Stadium, and it was at that venue that the Packers won Super Bowl XLV, when they defeated the Pittsburgh Steelers 31- 25.

The Wisconsin Badgers also just won the 2017 Cotton Bowl Classic at that same stadium, when they defeated the then unbeaten Western Michigan Broncos 24-16 on January 2.

“Jerry is a hustler,” Kramer said. “He’s always been a hustler. He’s got that method and that way about him. He’s always talking about his team. To me, that’s sensational. It’s nice to have a love affair like that. It’s nice to have something that is so interesting and important for you to enjoy. Jerry is blessed to have that football team. The Cowboys have been a wonderful thing for him and he’s been a wonderful thing for the Cowboys.

“Bottom line, I’m pulling for Jerry to get into the Hall. I mean, he’s named Jerry and he also played guard. But he’s also good for the NFL, whether you are a Cowboys fan or not.”