A couple of months ago, I wrote about the greatest draft class the Green Bay Packers ever had in their history.

All four of those players had excellent careers in the NFL, with two of them (Taylor and Nitschke) getting inducted into the Pro Football Hall of Fame. In my opinion, Kramer should most definitely be in Canton as well.

Currie was named All-Pro three times and was selected to one Pro Bowl.

Taylor was named All-Pro six times and went to the Pro Bowl five times, plus was named NFL MVP in 1962.

Nitschke was named All-Pro six times and for some reason only went to one Pro Bowl. No. 66 was also MVP of the 1962 NFL Championship game against the New York Giants, as he deflected one pass for an interception and recovered two fumbles.

Kramer was first-team All-Pro five times, was also named second-team All-Pro twice and was additionally named to three Pro Bowl teams. No. 64 was also on the All-Decade team of the 1960s. Finally, Kramer was named to the NFL’s 50th Anniversary team. Kramer is the only member of that first team not in the Pro Football Hall of Fame.

In addition to that, in the 1962 NFL title game in which Nitschke was named MVP, Kramer kicked three fields goals and an extra point in windy (40 mph gusts) and chilly Yankee Stadium, as the Packers won 16-7.

That wasn’t the only time Kramer shined under the bright lights of a championship game, as No. 64 played a big role in the Packers winning the 1965 NFL title, as well as the 1967 NFL championship.

Bottom line, that was quite a talented quartet that Jack Vainisi scouted and brought to the Packers.

Vainisi always had an eye for talent, as he was the scout for the Packers from 1950 through 1960.

In those 10 years, Vainisi picked six players for the Packers who would eventually be selected to the Pro Football Hall of Fame.

Sadly, Vainisi died of a heart attack in 1960 at the young age of 33, just prior the championship run of the Vince Lombardi-era Packers.

But in 1958, there was another member of the draft class who never got the opportunity to shine in Green Bay. That player was guard Ken Gray, who the Packers selected in the sixth round.

In fact, Gray was the last player cut by head coach Scooter McLean in 1958 just before the season began.

Gray ended up signing with the Chicago Cardinals shortly after the Packers released him. Gray had a great career with the Cardinals (the team moved to St. Louis in 1960) for 12 years before finishing his NFL career in 1970 with the Houston Oilers.

While he was with the Cardinals, Gray was named to six Pro Bowl squads, plus was named first-team All-Pro four times.

I had another opportunity to talk with Kramer recently and he gave me the rundown about what transpired in training camp that summer as he and Gray basically battled for one job.

Gray got a head start on Kramer, as he was already in camp for the Packers, while Kramer was in Chicago for the annual college all-star game.

“I was on the college all-star team and Otto Graham was the head coach,” Kramer said. “John Sandusky, who was one of the coaches on the team, had recently played with the Packers as an offensive tackle.

“Sandusky told me that the Packers were loaded at the guard position. He told me that I wouldn’t make that Green Bay team, but I could definitely play somewhere in the NFL.

“So I had that type of mindset when I got up to Green Bay. I was basically just waiting to be traded and my mind was certainly not on the job. Finally, Scooter McLean says to me, ‘What the hell is wrong with you? I mean, one day you look great and you work your ass off and take care of business, the next day you are looking over the fence, giggling and laughing. What the hell is going on?’

“I told Scooter that I was waiting to be traded. And Scooter goes, ‘You’re what?’ And I told him what Sandusky had told me at the college all-star game. So Scooter says, ‘I didn’t draft you to trade you. You are starting Friday night!’

That game was the second-to-last preseason game for the Packers versus the Washington Redskins.

“I played against a kid who had good size, but wasn’t real quick,” Kramer said. “I handled him pretty well and had a good game. The following week the Packers traded two guards (Al Barry and Norm Amundsen) to the Giants.

“Then the last player they cut was Kenny Gray. I knew then that I had made the team and was really excited, so I called home. So I’m telling my wife, ‘I made the final cut! I made the team!’ But right then Hawg Hanner and Jim Ringo came walking by. They hear me celebrating, plus they weren’t happy that the two guys who had been traded were pals of theirs.

“So Hawg and Jim take me out for a beer. I’m drinking a beer in a small beer glass, smaller than a usual beer glass. Meanwhile, Hawg and Jim are chewing my ass pretty good, telling me how close they were to the two guys who were traded. I’m standing there at the bar, kind of taking it with my mouth shut and nodding okay, as I’m massaging the beer glass with my left hand.

“I’m squeezing the glass letting my anger and emotions go out that way. All of a sudden the beer glass shattered and the glass flew every which way. Once Hawg and Jim saw that, they figured the ass-chewing was over and it was time to move on from that subject.”

Later on, Kramer was in downtown Green Bay at a cigar/newspaper shop getting some magazines. As he walked out of the shop, he could see Gray across the street.

“So I’m waking to the curb and Kenny sees me and yells, ‘You son of a bitch. You had a no-cut contract didn’t you?’

Kramer did not have a no-cut contract and obviously McLean thought that Kramer had a better camp than Gray before making the decision about who was going to be cut.

In an article by Jennifer Fierro of The Picayune from December of 2015, Gray talks about being cut by the Packers.

“Green Bay said, later on in my career, the worst personnel mistake they made was cutting me, which made me feel really good,” Gray said. “(Ray) Scooter McLean was the head coach when I was drafted. ‘I hate to tell you this, (the coach told Gray one day), but I’m going to let you go. You’re a great prospect, and you’re going to play somewhere in this league.’ My heart went to my feet, but what could I say? They fired him at the end of the year.

“Those experiences make you a better person and better player,” he added. “You know what it is to be rejected. It makes you work hard. You’re not so cocky and sure of yourself.”

Based on the talent of both Kramer and Gray, McLean should have kept both players. They would have made quite a tandem at guard over the next decade. As it was, McLean was fired after 1-10-1 season. 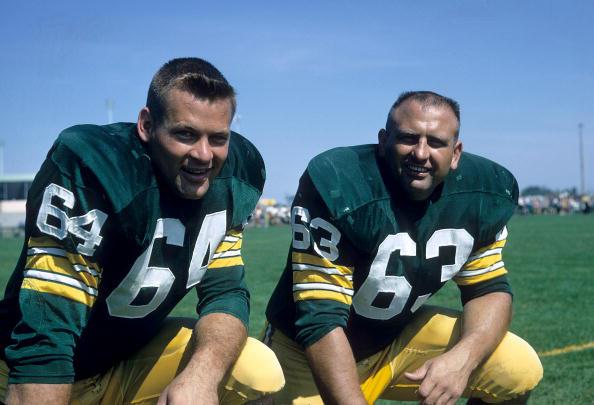 When Vince Lombardi took over in 1959, he saw that the Packers needed another guard, which is why the first trade he ever made was to acquire Fuzzy Thurston from the Baltimore Colts for Marv Matuzak.

Instead of the Kramer/Gray tandem, the Packers had a Kramer/Thurston tandem. So while Gray had a terrific career with the Cardinals, Kramer and Thurston became the best set of guards in the NFL for several years.

Thurston would tell anyone who would listen, “There are two good reasons the Packers are world champions. Jerry Kramer is one of them, and you’re looking at the other one.”

Unfortunately for Gray, he never played in postseason game with the Cardinals in his career there.

That being said, Gray was with the Cardinals in 1964 when they played the Packers in what they called the Playoff Bowl for the second-place teams in each conference in the NFL. The game was played at the Orange Bowl in Miami, as the Cards beat the Packers 24-17.

The Packers also played in a Playoff Bowl in 1963, when the Packers beat the Browns 40-23 in Miami. But Lombardi never cared for those second-place games.

Meanwhile, Ken Gray could only wonder what might have been had he made the team as part of that 1958 draft class for the Packers.