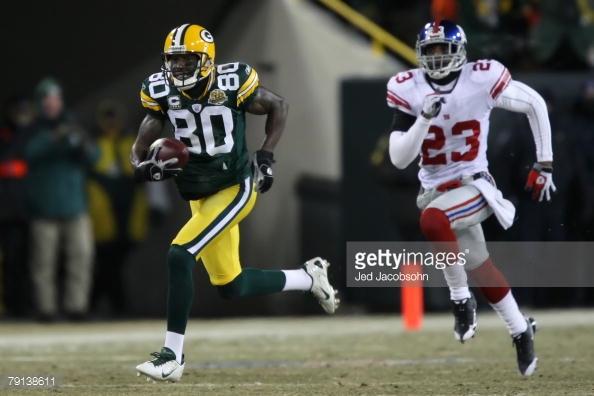 Donald Driver had a 14-year career with the Green Bay Packers and is currently the all-time leader for the team in terms of receptions (743) and receiving yardage (10,137).  Driver was also named to four Pro Bowl teams.

Driver had 61 TD receptions, which is the fourth-best mark in Green Bay history, only behind Don Hutson (99), Sterling Sharpe (65) and Jordy Nelson (63).

That all led to Driver being inducted into the Packers Hall of Fame on Saturday.

But nothing came easy for Driver when he joined the Packers in 1999 as a seventh-round draft pick for the Pack out of Alcorn State when general manager Ron Wolf selected him.

Driver only had three catches for 31 yards and one touchdown as a rookie.

But Driver kept working hard and he got more opportunities in 2000, as he had 21 receptions for 322 yards and one TD.

But that all changed in 2002, when No. 80 worked his way up the depth chart. Driver had 70 receptions for 1,064 yards and nine TDs that season.  Driver also was named to the Pro Bowl squad for the first time.

But then Driver took another step backwards in 2003, as he had only had 52 receptions for 621 yards and two touchdowns. In addition to that, Driver suffered a scary injury against the Minnesota Vikings. But no matter, Driver was both resilient and persistent in becoming a better player.

“I think everything in my career has been truly a blessing,” Driver said Saturday. “I made a way out of no way. I remember 2003, when I fell on my neck against Minnesota, I remember being on a stretcher going through that tunnel, my wife told me that my career was over. She wanted me to retire and put the cleats up. I told her, ‘I don’t think God’s done with us yet. If I can recover from this, let’s just see where God takes us.’ Eleven years later, he took us to places where we never thought we would go. It’s been truly amazing. I can look back and appreciate every opportunity that I’ve had.”

But all his continued hard work paid off, because from 2004 through 2009, Driver averaged 82 catches for 1,141 yards and six touchdowns per season. Driver was also named to two more Pro Bowls during that period.

The 2010 season would be a special one for Driver. Not so much for his production, as he had just 51 receptions for 565 yards and four touchdowns (and another Pro Bowl selection). No, it was because his team was able to win the Super Bowl.

In Super Bowl XLV, Driver was injured early in the game and only had two catches for 28 yards. But even with the disappointment of being injured, Driver cheered on his fellow receivers, as Nelson (nine catches for 140 yards and one TD), Greg Jennings (four catches for 64 yards and two TDs) and James Jones (five catches for 50 yards) put up some big numbers.

The Packers ended up beating the Pittsburgh Steelers in that game of all games 31-25, behind the MVP performance of quarterback Aaron Rodgers, who threw for 304 yards and three TDs without a pick.

Speaking of the postseason, in his career, Driver had 49 catches for 675 yards and three TDs. One of those touchdowns was when he caught a 90-yard pass from Favre in the 2007 NFC title game against the New York Giants at frigid Lambeau Field.

In his last two seasons with the Packers in 2011 and 2012, Driver had just a combined 45 catches for 522 yards, but did have eight touchdowns.

But all in all, Driver had a tremendous career in Green Bay which eventually put him among the best of the best in Green Bay lore. But when did Driver ever imagine being enshrined in the Packers Hall of Fame?

“I don’t think it ever crossed my mind until the day that I was up for breaking Sterling’s record,” Driver said. “I think that’s when I said, ‘OK, maybe there’s an opportunity for me to be in the Packers Hall of Fame. I remember getting that phone call from Sterling. He said, ‘Listen, if you break my record, you better score a touchdown, because just a catch is not going to do it.’ I remember catching the ball against Detroit and made one move and I thought, ‘Oh, I scored. It’s easy.’ Seven guys hit me and I didn’t score on that play. At that point, I think that’s when I started to think about it. Then I knew I was only 3,000 yards away from breaking James Lofton’s record. At that point, that’s when I started thinking, ‘This could be possible.’

“To be the all-time Packers leading receiver in franchise history, that tells you that you’re among some of the greatest icons and legends that ever played in the Green and Gold. To surpass those individuals is something I’m going to cherish for a long time. The day will come when somebody will break mine. I hope they cherish it as much as I cherished it when I broke theirs.”

When Driver retired from the NFL, I happened to chat with Jerry Kramer, another member of the Packers Hall of Fame and someone who definitely should be in the Pro Football Hall of Fame, soon after that occasion. Kramer obviously was impressed with Driver as a person, both on and off the field.

“Donald is an exceptional human being, and obviously a sensational ball player, but he’s also just an awfully nice man,” Kramer said. “He’s well-grounded and he has some character about him, and also some class. Plus I think of grace. Grace off the field, and obviously grace on the field, with the beautiful moves, and the tippy-toes, the great hands and the intelligence to run the route, but there’s a grace, which is the only word I can use to describe his attitude off the field. That’s with the fans and with everyone. He treats everyone with dignity and class.”